My History: Part One - Beginnings

Note: This particular blog post is rather long. Mostly as I didn't want to split it into too many posts, and also because it contains 3 years worth of information. The good parts are not highlighted.

I've been playing Eve Online since around 2009.

My friend and room-mate (also landlord - it's complicated) was playing a game for hours and hours on end, and in my efforts to be sociable and friendly, I enquired.

I'd heard of subscription MMOs before, mostly in the guide of WoW, but at the time I was a poor student and four extra pints and a kebab was much more important than a monthly subscription to a video game.
However, after watching him play for a number of hours, I decided to give the trial a go.

After a monumental amount of time downloading the client, and signing my life away to CCP Games, I logged in and created my character. I've long used Notmo as my gaming alias, and this was no different. I sculpted a dashing male character and clicked some random buttons that defined what race I was.

It's at this point, I should mention that I was not playing on a desktop machine. I was playing on a laptop. No, a netbook. A 13" netbook. That 13" includes the plastic around the actual screen.

Minutes later, I learned that my avatar was an appaling abonination when viewed on a reasonable sized screen.

I still remember the utter confusion of trying to work out what the fuck I was supposed to be doing, and the desperation of my voice as I begged my friend to tell me what skills to train, what ship to buy and how to warp it around. And also to lend me some ISK.

My memories of the next few weeks are rather hazy, but from what I can deduce, I was following my friend round in a Rifter, killing the frigates while he killed the other stuff, and then when he didn't want to play, running level one missions a few jumps away.

There is one distinct memory I have of the two of us, along with another one of his RL friends flying a small convoy of two Drakes and a Rifter, having to traverse lowsec in order to move to a different mission hub. That was a tense evening comprised of terms of did not understand. What were perches and safes? Who were these pirates? What do you mean they could just blow us up? Luckily, the move went without too much drama, but I think it was that evening that got me hooked to this game.

After another few weeks, my friend decided he wanted to upgrade his ship, from a Drake to a Tengu. Unfortunately, he lacked the ISK to do this, and so decided to buy it from a nice Chinese lady with his credit card. The evening the ISK arrived in his wallet, he immediately purchased a suitably blinged Tengu, gave me 500m and we went and shot a few red crosses. The next morning, his wallet balance was red and was preluded by the '-' symbol. Oh dear.

"It's OK" he stated, "We can just rat until I make the money back. I just have to NOT die, and you'll have to buy all my ammo, not get any of the rat bounties and sell all of the loot/salvage" (I was following in a Noctis rather than a Rifter at this point). I felt guilty that CCP had taken all his money, and yet the money he gave me still sat pretty in my own wallet.

We followed through on that plan for about a week, by which time he got very bored very quickly and went back to Borderlands.

I, however, carried on.

I upgraded my account (thanks Student Loan Company), worked out what EveMon was and slowly started to decipher what this game was about, and how all of the different things worked.

For your amusement, here's the Rifter I was flying - I recently found it whilst consolidating assets spread around HighSec. 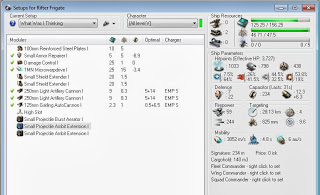 If you're going to comment, please ensure you have a good command of the english language.

Other Blogs to Read

Podcasts to Listen To